skip to main | skip to sidebar

A few years later I was at university. One afternoon I was at home talking on the phone to my friend Michelle. The sliding door to my room was closed, then someone rattled it to say, I assumed, that dinner was ready or that someone was at the door to see me. "Yeah, hang on," I yelled out.
Michelle said: "What in the f*** was that?"
"What was what?" I replied.
"I think that was a tremor," she said.
"Cool," I said, I wasn't here for the last one (in 1989)."
"Well I was," she said. "I'm getting outa here!"
"No, just stand under the doorframe," I said and did just that (I had read that somewhere).
Well, she uttered something unprintable and rushed outside her flat and into the street.

As a bit of a sidebar, it's interesting to note that at the time of the turmoil in Newcastle, where we were in Coffs Harbour was very quiet, peaceful. Tony and I had been sitting on grass in the caravan park playing chess while in our home town of Newcastle, people ran for their lives. I can't remember who won that chess game but that doesn't matter, does it? While we were playing a peaceful game that represented war, a peaceful city was in the midst of its own war, against nature.
Years after the earthquake, when Novocastrians told their tales, I had always felt left out, but I was soon warmed by the curiosity of others who wanted to know about my time in Coffs at the time of the quake, the very story you are reading now. It was still an earthquake story, I realised, and as relevant as any other earthquake story.

Posted by Matthew Glenn Ward at 9:11 pm No comments:

NEWCASTLE AUSTRALIA:   On Saturday last, a group of three young friends discovered to their amazement what would turn out to be the remains of an ancient Egyptian tomb that was originally discovered by archaeologists in 1920, then lost again, it was feared, for all time.

The young people, all 11 and 12 years of age, told SKiVE about their discovery and wanted to remain anonymous. Of course 'wanting' and 'getting' are two different things... Here are their names: Michael Zembert, Kathi Chermolian and Bradley Bradleyson.

The friends were playing in a vacant lot in Newcomen Street, searching for old bottles to sell at The Bottle Emporium in King Street when they came across a stone wall with strange markings. They reported their findings by phone to the University of Newcastle's Egyptology Department, who quickly referred them to Ancient History at the Newcastle Technical College in Tighes Hill (who have more extensive research material than the uni's well-known slide rule and framed picture of Rameses II).

The tomb was revealed after The Newcastle Herald had a block next to them cleared in preparation for a 7 storey subediting highrise to be called 'The Tye-Poe Center'. The previous week some construction workers had noticed the strange markings but believed them to be part of 'Ahmose The Sailor', a famous Egyptian-themed deli that was famously popular in the late 1880s.
Doctor Xavier Filament of Steele Street said he thought the wall was part of the set of Cecille B. Demilles' 1920s epic, 'Nefertari The Beautiful', which was filmed in and around Newcastle.
In fact the tomb is that of the lesser-known satrap pharaoh Novocastrius III, after whom Newcastle is named. Novocastrius governed from 1000 to 1070 A.D. and became fat and wealthy with a monopoly on bricks as well as the ensuing Cobblestone Rush of 1049 A.D.

When Novocastrius died in 1070 A.D. of acute arthritis (he liked to count his bricks after every day till midnight), the whole city had the day off and headed for the 'Maize & Beer Porridge Hotel' (now The Grand) on King Street for a quiet beer. If you go there today you can still see the stool when Novocastrius sat every afternoon, his name is engraved on it in the form of traditional cartouche with the hieroglyph of a block & tackle and a dapper frog with a fancy crown.

Archaeologists have roped off the area around the tomb and plan to be there for a period of four years to conduct a survey, which funnily enough is the same about of time the grant money for the dig runs out.


Posted by Matthew Glenn Ward at 10:52 pm No comments:

Some more book covers I have designed / assembled

Posted by Matthew Glenn Ward at 12:43 am No comments: 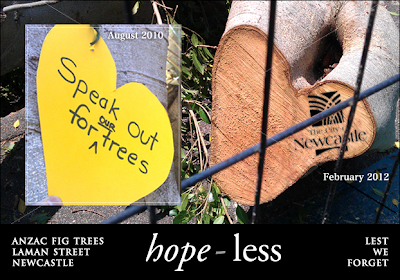 hope - less
I took the photo on the left, of the yellow card heart, in August 2010. The Laman Street Figs had been adorned with toys and notes written on card, in this case in the shape of a heart.
The photo on the right, of the sawn-through Fig tree, was taken on the 4th February 2012, last weekend.
I don't think it's the same tree, but I noticed that the sawn-through trunk looked heart-shaped, and actually, the angle of both card - held by my girlfriend Justine - and the sawn-through tree are almost the same (I wasn't consciously trying to replicate that).
BTW, the NCC branding logo is my digital mischief.

Feel free to link to this page or download the image and put on your own Facebook page / blog.
Posted by Matthew Glenn Ward at 4:18 pm

Day 5. The sun finally shone, but Novocastrians could see what the damage looked like in the light of day. 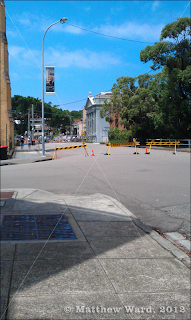 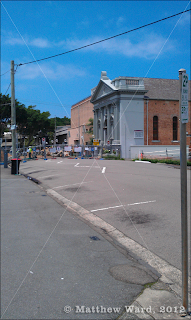 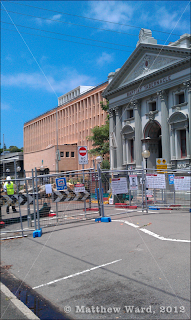 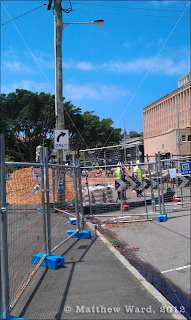 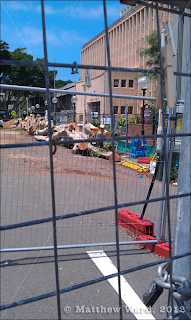 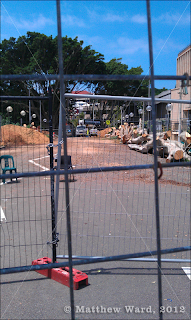 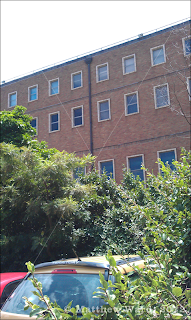 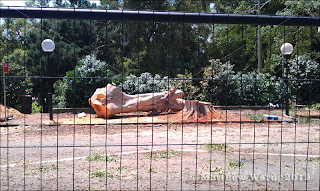 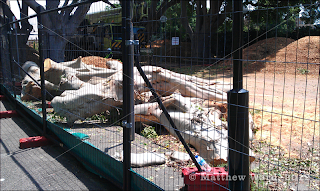 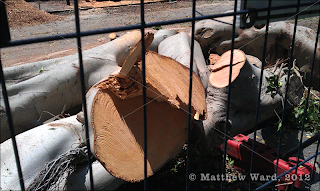 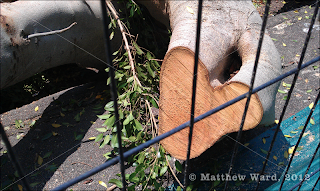 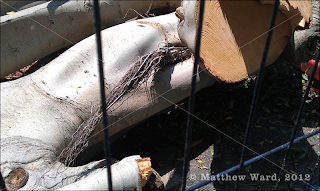 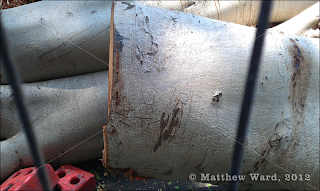 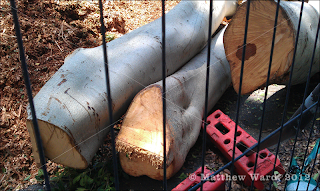 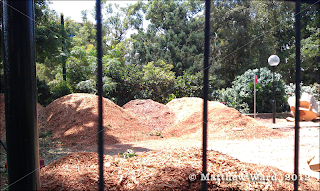 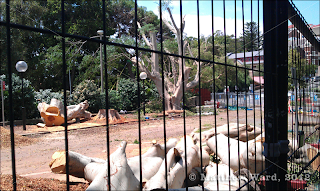 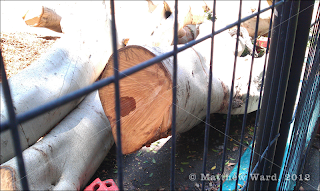 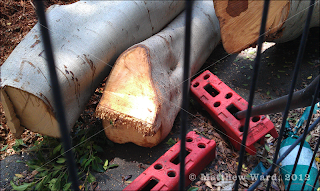 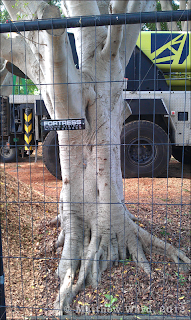 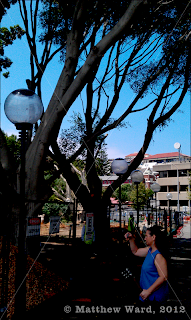 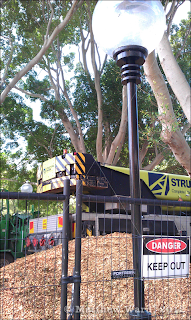 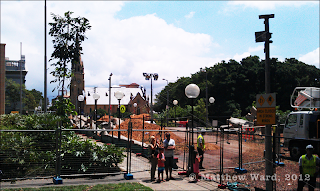 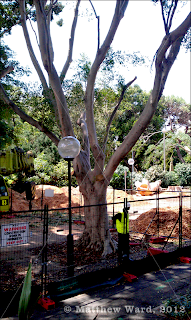 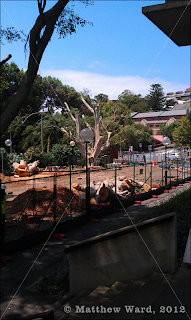 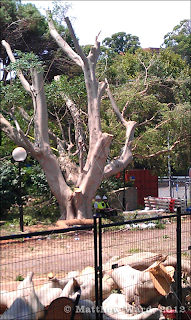 Posted by Matthew Glenn Ward at 10:07 pm No comments:

Day 4 was more pleasant, weather-wise, but the trees continued to be felled. In the afternoon, at 4:30pm,  more than a hundred pro-fig protesters made noise in the way of chants of SHAME COUNCIL SHAME!, bells, whistles, horns and pots and pans hit with spoons in a successful attempt to make more of a racket than that of the chainsaws and wood chipper.
Liveable City Director was Frank Cordingly was seen hiding behind a column near the Art Gallery, admiring his work no doubt. Tree felling / cutting / chipping ceased around 5pm, allowing those attending the Gallery exhibition - including musical icon Kamahl - to be able to chat to each other without raising their voices. Here are some photos.

Matthew Glenn Ward
Newcastle, NSW, Australia
Born in Newcastle NSW Australia in the '60s, went away to Qld when I was a boy, then returned to this former steel city, now almost cloistered Metropolis. I run my own Empire: Mockfrog Enterprises (which is divided up into Mockfrog Design - web & paper as well as Skive Magazine, and Mary Celeste Press). I have been creatively writing since 1992 - started with poetry, had poetry and short stories + articles published in mostly university mags. In 2004 had a novella, JAKE, published through Independence Jones in Sydney Australia. In 2006 my book of short stories HER MOUTH LOOKED LIKE A CAT'S BUM was published through World Audience in New York City, USA. In 2008, World Audience published a collection of my poems called, CATS CREEP THE FIRE TO ART. My new book, JOHN F. KENNEDY LIVES IN THE FUTURE! : short stories, is published by World Audience Publishers NY, USA, and is on sale now through Amazon.